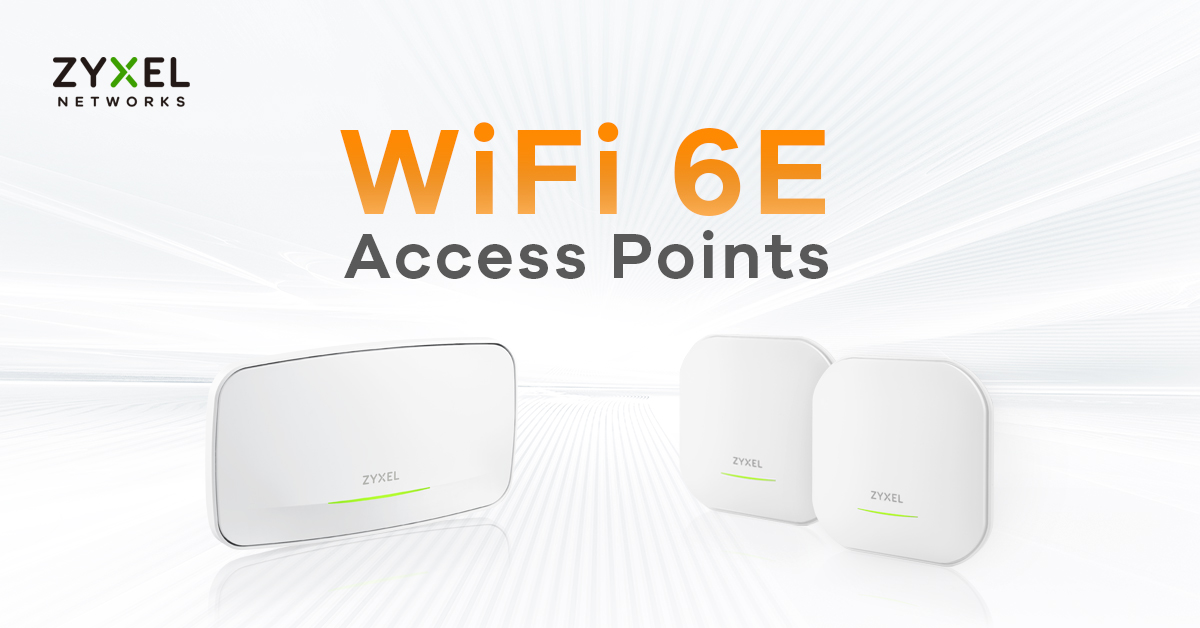 WiFi 6E has become the go-to solution for WiFi congestion, yet implementing WiFi 6E across an entire network can be costly. For those working on a tight budget, such as SMBs and schools, using WiFi 6E APs in congested hotspots is a more affordable solution. However, given the high-frequency nature of 6GHz, most WiFi 6E devices typically have a shorter range, which can create an uneven user experience for those connecting at varying distances.

Designed to solve this problem, Zyxel’s WiFi 6E APs provide a powerful wireless range boost, helping SMBs and schools to reap the full benefits of WiFi 6E with minimal investment. The company’s three new indoor AP models include NWA220AX-6E and WAX620D-6E, which both sport the BandFlex antenna for those looking to off-load traffic to 6GHz from existing WiFi 5 or WiFi 6 networks. The third in the family, WAX640S-6E is a premium tri-band model with a smart antenna that provides the ultimate cure to interference woes.

The three new APs have been equipped with a fine-tuned 4x4 radio in 6Ghz in combination with quality RF filters and optimized components to maximize the range each AP can cover. This makes a huge difference to the user experience and means that users or devices connecting from a greater distance will still gain equally fast connection speeds.

BandFlex – 5GHz or 6GHz, switch as you need

The WAX620D-6E and NWA220AX-6E APs feature BandFlex – an industry-leading radio design that can be configured in either 5GHz or 6GHz. This provides more flexibility for those looking to off-load WiFi traffic in congested areas to the newly opened 6GHz, or to those who would rather deploy 5GHz for now and switch to 6GHz when they have more compatible client devices working in a particular area. The WAX620D-6E and NWA220AX-6E also allow for a more budget-friendly choice than a full-fledged tri-band AP.

Smooth operation, with no interference

The greater the number of devices and applications running in the same space, the higher the chance of interference. With Zyxel’s WiFi 6E APs, interference is much less of a concern, as they come with an Advanced RF filter plus Advanced Cellular Coexistence, which minimizes interference from nearby 5GHz channels and 4G/5G mobile networks. The premium model, WAX640S-6E, also includes a smart antenna, which continuously monitors the connection and adaptively adjusts its antenna patterns to mitigate co-channel interferences and boost WiFi performance.

“There’s an increased reliance on devices and applications in our workplaces, schools, and campuses – making us ever more dependent on the capabilities of WiFi. Small businesses and public sector organizations need a high-quality, high-speed service, regardless of proximity or the number of people connected, which is why we’ve introduced our new WiFi 6E APs to alleviate the strain on WiFi networks,” comments Mr. Crowley Wu, Senior Vice President of Zyxel Networking SBU.

The three new APs support standalone, controller, and Nebula cloud-based management*, allowing for full flexibility when operating their chosen solution. The WAX640S-6E and WAX620D-6E come with a one-year Nebula Pro Pack license, while the NWA220AX-6E comes with a free Base Pack license. F or more information, please visit https://il.zyxel.com/WiFi6E .

*The NWA220AX-6E is a dual-mode model that only supports standalone and Nebula cloud-based management.

About Zyxel Networks
Zyxel has been getting business and home users online for over 30 years, relying since Day 1 on innovation and customer-centric service. In 1989, this meant analog modems. Today, it means using AI and the cloud to deliver rapid, reliable, and secure networking solutions for business and home users.

Zyxel is a global force in the communications market with an unrivalled international presence that include:

We’re building the networks of tomorrow, unlocking potential, and meeting the needs of the modern workplace—powering people at work, play, and life.